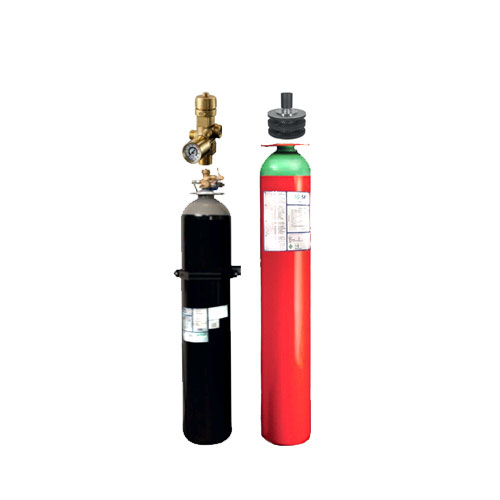 Extinguishers fires by reducing oxygen concentration in the hazard area, leaves no trace & no harmful impact because it is made up of gases that we already breathe in.

iFIow Valve – Probably the Safest Valve in the Market

lOO% Valve drawing, for guaranteed quality and functionality. This patented valve allows gases to be released in a constant low and at an unvarying pressure of 60 bar. Fails safe, valve closes if pipeline pressure rises above 60 bar. With this, iFlow is able to release 95% of its extinguishing agent in just 60 seconds!VDS and Transportable Pressure Equipment Directive certified.

Data Centers and server rooms are continuously improving their efficiencies to store and process more data. Improvements in computing hardware have led to an increase in Hard Disk Drive (HDD) sensitivity to sound. Inert gas fire suppression systems, normally used to protect this type of equipment, can produce sound levels that may have adverse effects on noise sensitive equipment. The LPG Acoustic Nozzle, designed for inert gas fire suppression systems, decreases the acoustic footprint during a discharge.

The LPG Acoustic Nozzle directs agent into the hazard area and reduces the sound level compared with standard nozzles. Flow calculations are used to specify the nozzle orifice size for the correct quantity and distribution of agent.

This matrix design bring numbers of benefits such as:

200bar / 300 bar, Selector valve, Acoustic nozzle
lG-541 – A Safe And Sustainable Technology For The Environment
G-54l is a clean agent that does not contain halocarbons. Since it made up of natural components that exist in the sir, these components simply become part of the earth’s life cycle following a discharge. This makes G- 541 100% earth-friendly.

IG-541 is a blend of inert atmospheric gases that contains nitrogen 52%, argon 40% and carbon dioxide 8%

At atmospheric pressures carbon dioxide is a colourless, odourless and non – conductive gas capable of penetrating quickly and efficiently the area to be protected. its density is approximately 50% greater than the density of air. tXA, is stored in high-pressure cylinders as liquefied gas. Although the use of coa as extinguishing agent declined with the introduction of halons, it is still widely used for firm protection, especially since Montreal Protocol was introduced [where bases were established to ban the use of Halon extinguisher].

Extinguishes fires by physical means according to two main mechanisms. The first one is by decreasing the oxygen level inside the enclosure from 21% to a level below 15%. Mast fires are unable to maintain combustion at such low levels. The second mechanism is by means of cooling and heat absorption.

When dealing with the protection of occupied areas, consideration shall be given to the fact that if inhaled, even in low concentrations, it may lead to asphyxia. Under required safety precautions tJth, has been effectively applied for over 50 years to protect areas such as transformer rooms, archives, electrical hazards, record stores and computer rooms. in some countries regulations ban automatic control of m, systems for the protection of occupied areas.
CO2 is the only gaseous agent where the design rules specifically provide guidance on the protection

May be used on 80 litre and 140 litre containers. Manifold may be omitted on systems using 8 or fewer 80 litre containers (when using horizontal check valve). Outlet pressure regulated at 60 bar (nominal). Operating range -20°C to 50°C. No orifice plate required, can be operated electronically, pneumatically or manually. On site pressure gauge removal possible